The beginning of 2019 saw an 8 week run of Showstopper! at The Other Palace for which Oscar Thompson of Show Works was appointed to manage the sound.
Later on that year, Show Works secured the sound hire for the Showstopper UK Tour! Currently on permanent hire from Show Works as the show continues to evolve and explore multiple formats.

The Show
The show’s format is certainly different than that of your normal musical – where the audience decide the direction of the show.
A usual Showstopper comprises of 7 Actors; 1 ‘Writer’, 3 boys, 3 girls, accompanied by a 3 piece band: Percussion, Keys & Reeds.
The writer sets up the show asking the audience where they’d like the show set (this could be anywhere), what song styles that could feature, and most importantly the name – which is usually quite punny!
Once the settings have been chosen, the show is totally improvised there on out.

During the improvisation, the writer can interject and ask the audience for more suggestions, or make things harder for the cast much to the amusement of the punters!
Because of this not-so-usual format: the sound, both in terms of the design and the setup are very particular.
Mixing a musical where the operator doesn’t know who is saying the next line does seem crazy, however certainly not impossible.
It certainly isn’t number crunching or muscle memory, its just as much as being part of the action as it is being on stage.

The Design
So how does it work? Line-by-line mixing is definitely out of the question, so all of the vocal microphones have to be left on at all times. This also sounds like a nightmare, but with the show so fine tuned and the cast well aware of the this – it presents very little issues to the final product.
With all of the vocal microphones open, we tend to level off the normal speech level at ~ -10db on the faders, so that when we have all of the faders at -10db, everyone is around the same volume.
This does change as the cast use accents to portray different characters, but certainly a good starting point.
The tendency here is also to be slightly on the louder side for speech at -10db on the fader. The reason being is that although its very nice to make full use of the length of the fader, this does work against the operator when they’re quickly reacting to the action and need to change a level very quickly.
The last part of this is simply learning body language, something the stoppers use profusely in their improvisation techniques.
After about a week or so of mixing, the operator is able to predict who is going to speak/sing next, who’s going to lead a song or who’s going to interject.
It is a very strange concept, but the operator’s mind does start to pick up very subtle things (normally subconsciously) that add up to predicting where the story and cast might go next.
Because of this, the show does require a lot of concentration from the second the improvisation starts, but is also something that is very rewarding at the end of the show.

The layout of the sound desk is another tool for making improvisation work in theatre sound. In the case of Showstopper, the main aim is to get all of the inputs on the very top layer of the desk for easy access, allowing the operator to react very quickly to changes in instrumentation and most importantly have access to the radio microphones at all times.
As well as having the inputs easily accessible, vocal reverbs, band reverb and the band VCA feature on this layer too adding to the plethora of controls.
Two reverbs are used for the vocals; a long and a short. The radio microphones are constantly routed to this (albeit the writers) allowing the operator to blend between the two reverbs, matching the style of that particular song.
Very commonly is the band on its own VCA too, gaining ultimate control over the whole level at the band at anytime, this is a must for when actors break in and out of song.
Adding to the texture of the band is the band reverb, also on its own fader. When underscoring scenes, this reverb can really come out and create beautiful tales to subtle underscores. Helping the action blend from scene to scene and eventually into song.
In all cases here, the reverbs are automated using a VCA on the aux send, allowing the operator to snap out the reverb whilst leaving the tail to continue.

Being improvised means that both the cast’s and musician’s monitor mixes are absolutely crucial: if the cast can’t hear the musicians and visa versa, then the show would be very hard to perform.
For this reason vocals are present in both the onstage and musician foldback.
This certainly seems like another nightmare having vocal foldback as well as all of the microphones on at once, however this is mostly combated by the use of headset microphones, to get the microphone as close to the mouth as possible as to avoid feedback.
Another factor that helps the sound in these challenges is the cast. They are very well vocally trained, and understand the importance of projection and diction which all adds up to helping both the FOH and Monitor mix.

The musicians have carefully selected their instruments in order to create a range of full on, vibrant sounds no matter the style of music that is thrown at them.
The percussion setup comprises of the following; Kick, Cahon, HiHat, Cymbals, Toys, Djembe, Bongos and an SPD allowing a variety of textures and pallets to be explored during the show.
The drum kit is closed mic’ed on every instrument in order to get the full sound of each part of the kit, giving the operator full control of blending each of the sources to best portray that style of music.
In some cases, instruments such as the Djembe and Cahon are double mic’ed in order to capture different sounds from the same instrument – making the instrument sound either more deep and bassy or clear and snappy at the touch of a fader.
The SPD is the god send for all modern electronic music (think Hamilton or Eugenius!) allowing that one extra pallet that the traditional kit couldn’t already cover.
Keys is headed up by MainStage, allowing a wide range of sounds to be selected over the standard piano. Not only this but it also allows the keys player to play the bass using the left hand side of the keyboard whilst playing as usual patch using the right. Two musicians for the price of one essentially! But definitely helps in the bulking out of the sound.
Naturally, the reeds player then distributes their playing over both the saxophone and clarinet during the show. The reeds player doesn’t tend to lead the songs, where the percussion or keys may do, though definitely adds a new dimension to the sound, often solo’ing in and out where necessary.

The Hire
Showstopper! have many different formats of the same show to cater for multiple clients; this includes a kids show, a corporate show, a touring show and a west end show. Unsurprisingly these all have different formats which means it has been important for us as a hire company to make sure each show is correctly supplied.
The west end show is notably the most well supplied with a DiGiCo SD9 FOH, Shure UR1M/UR4D radio microphones, DPA/Sennheiser/Shure band microphones and EM Acoustics monitors. Show Works supplied Showstoppers! monthly show at the Lyric Theatre until Thriller closed in March 2020.
Because of the amount of time the touring show is out for, the equipment choices have been made carefully, as well as insuring the equipment tailors to the budget of the client.
Show Works chose the following equipment for the touring hire;

Show Works chose the Yamaha TF3 to head up mixing the show due to its ability to easily customise the layout of the desk, as mentioned previously – a very important factor in mixing the show.
Yamaha also offers arguably the best reliability in the field. This reliability combined with the redundant network that the Yamaha TIO1608-D stage boxes run made the TF3 a solid choice for a long term hire.
QSC, famed for their amplifiers made their way into the hire for Showstopper! The RMX series is one of QSC’s best selling product lines. An amplifier with great sound and build quality, combined with QSC’s E series speakers made another great fit for this show.
These choices rounded off with Sennheiser, Shure and AKG microphones allowed a sleek and easily tour-able system.

The Services
Show Works also manages the sound scheduling/staffing for Showstopper! with the Managing Director of Show Works, Oscar Thompson, being appointed as head of sound.
Another reason to make the touring hire straight forward is that Show Works have around 8 sound operators on their books to operate Showstopper! This may seem a lot however with the amount of shows that Showstopper! performs means that multiple operators may be required on the same day.
Because of the amount of different operators that may use the same equipment, the hire needs to be tailored to everyones different mixing styles and needs, hence the choice of equipment for the hire. 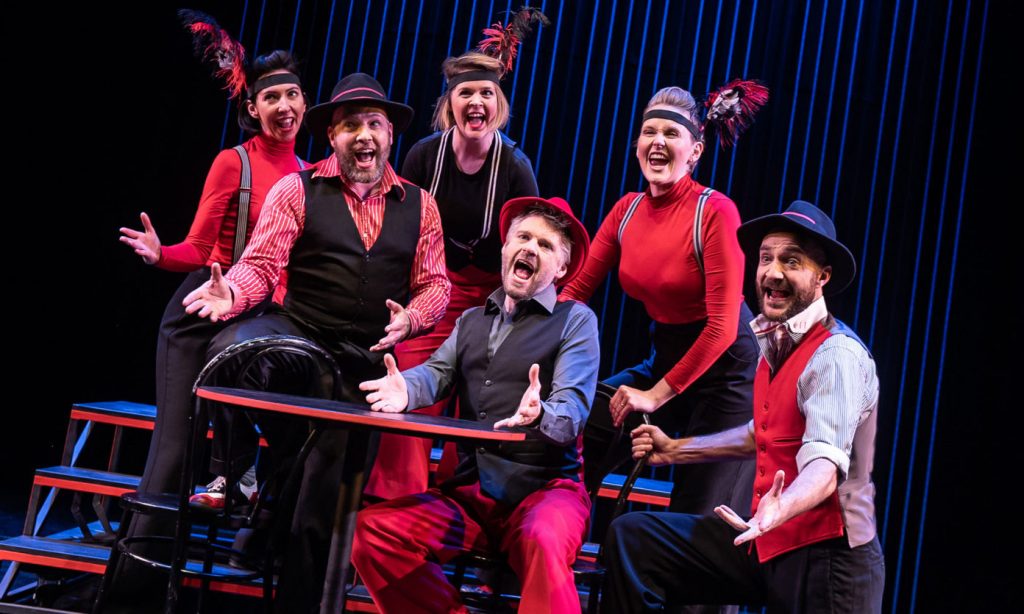 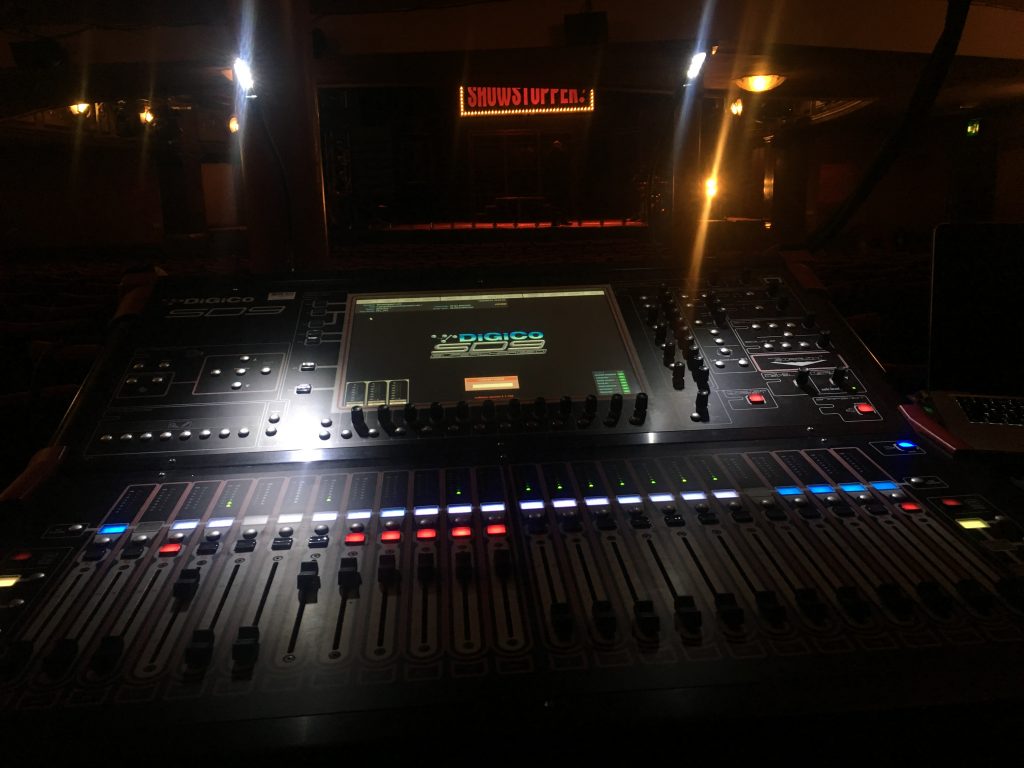