Overview:
For both the prospect of doing our part to save the environment, as well as the excitement of a new project, Show Works set out to power their unit and offices from the power of the sun alone (well sort of!).

The Set Up
From the original concept to the final product, the scope of the project naturally changed a little. Originally the plan was to build everything (solar panels, batteries, inverter etc.) into one unit, however the plan eventually changed after fears of putting ‘all of your eggs in one basket’.
Rather annoyingly this would have been a great product to offer on outdoor events and festivals, however quickly got very complicated and not to mention, heavy! Hopefully one day we’ll be able to offer a product like this.
The project ended up with a solar ‘array’ outside (for obvious reasons) with the clever technology inside converting the power the solar panels generate into useable mains electricity!

The solar array frame was built using 48mm scaffolding. The scaffolding tube made it easy to quickly construct a solid frame that could be easily adjusted to suit the size and angle of the solar panels. The solar panels were then mounted onto unistrut which sat on the scaffolding frame to complete the array.
Each solar panel installed was rated at 120w. A total of 4 solar panels installed in the array raised the potential producing of power to 480w in optimal conditions.
The solar panels were then wired in 2 series strings. This was chosen to raise the voltage high enough so that the panels would charge the batteries effectively at 24v. From here the solar panels led into a breaker box containing a fuse for each series string as well as a 40A DC Breaker for over current protection and isolation of the whole array. The 2 series strings met in parallel in the breaker box, to then travel onto the hybrid inverter.

The hybrid inverter, made by Voltronic, charges the batteries from the solar panels, as well as inverting and finally acts as an ATS (automatic transfer switch) in the event that the batteries run out of juice, so that the inverter then runs off ‘grid’ or ‘utilty’ power (eg. the power from the national grid).
Having an inverter that manages the charging of your batteries, inverting and transferring the supply is very handy for monitoring all of your solar data from one location. The inverter can tell you how much power is coming in from the solar panels, how much power is going out, as well as the battery levels and charging status. The inverter has a built in USB interface so that this data can be monitored over the local network or even the internet.
The charging of the batteries was handled by the MPPT controller section of the unit. MPPT, standing for: Multi Point Power Tracking is a relatively new technology and a very efficient way of charging batteries via solar.
MPPT charge controllers are able to handle the widely variable voltage and amperage a solar panel might generate and ‘control’ it into useable and regulated power the batteries can accept. MPPT charge controllers are famed for their efficiently and hence made a good choice for this set up.

For batteries, 2 x 130ah sealed lead acid batteries were chosen. The batteries (also wired in series) provided 24v to the inverter. The inverter, being able to generate 2400w continuously and 4800w for a short period of 10s, required a 24v input. The main benefit being that the amperage (on the battery side of things) at 24v as apposed to 12v is much lower and safer, as well as requiring a smaller gauge of wire, hence saving cost. To add to the safety, DC breakers were used between the battery and inverter in the case of an over current situation.
In this system, the batteries acted as sort of a ‘buffer’ between the solar panels and mains output.
The unit and offices use about 200w continuously under normal conditions through loads such as the lighting, servers and most importantly, the fridge. With the solar panels generating as much as 480w in some scenarios, power would have been wasted if there wasn’t somewhere to store it. The batteries allowed power to be stored when it isn’t all needed, and then used when it is (eg. night-time).

From the inverter, the mains power then distributed across the unit and offices through a combination of drop down power hangs in the unit, and switched outlets in the office to better suit the individual needs. Each circuit was individually protected both from over current and residual current faults to insure maximum safety.

The photos below show the whole scope of the project.

Get In Touch
To discuss your project or any other enquiry, please get in touch with us either on info@show-works.co.uk or 02038686200 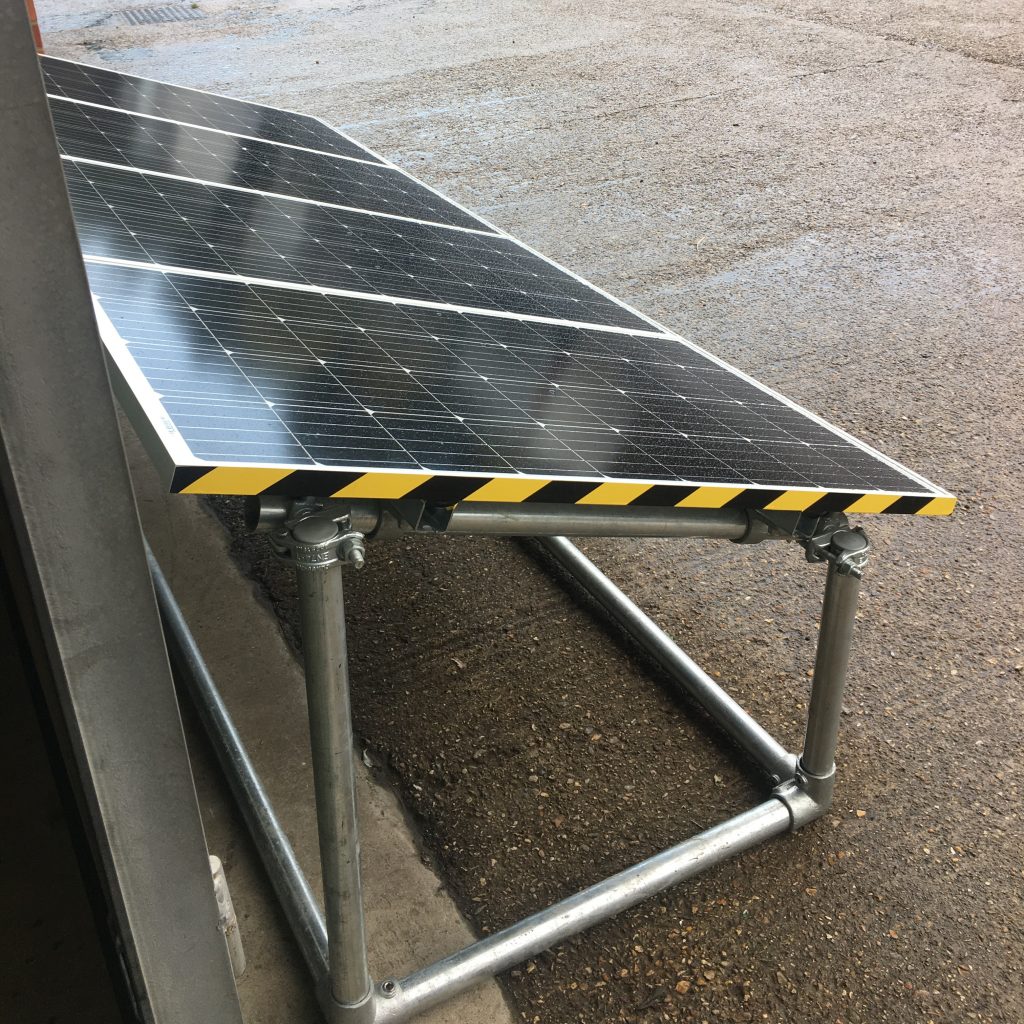 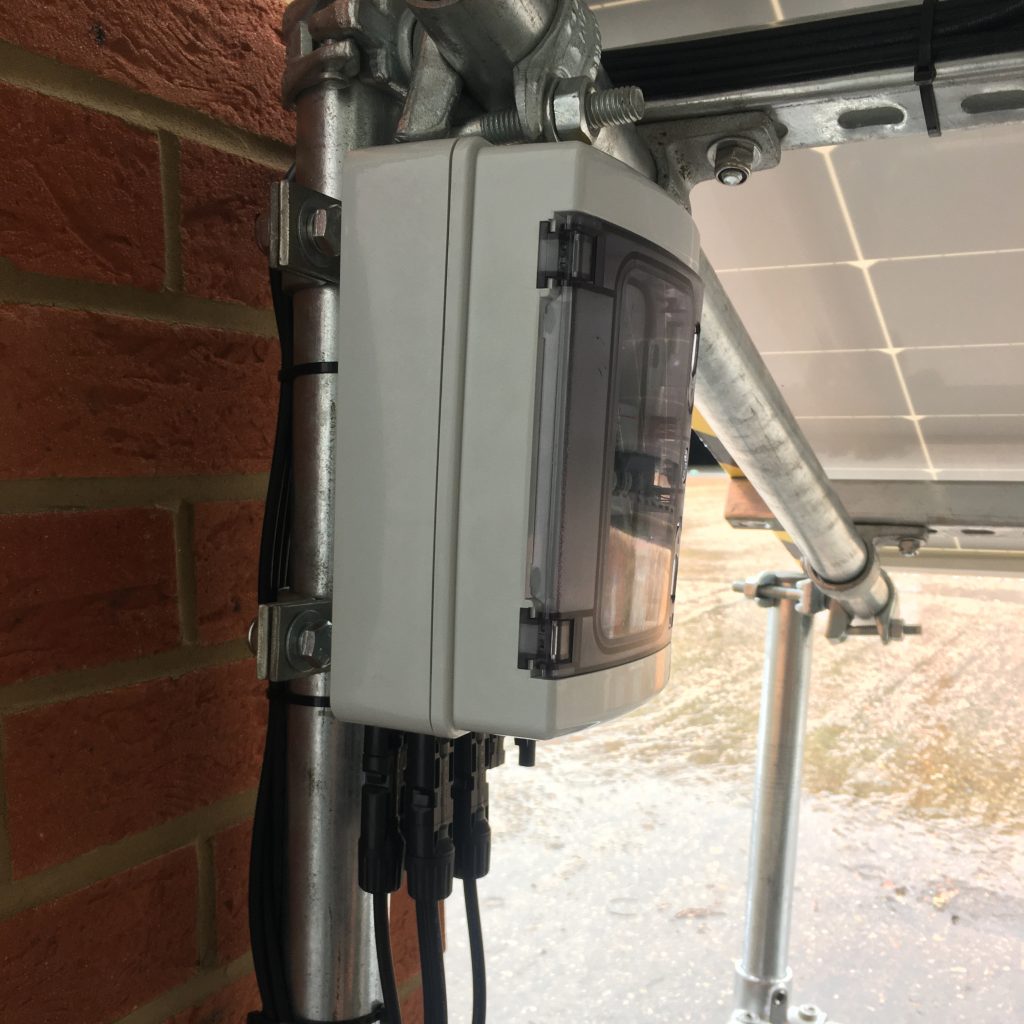