Since 2019 Show Works has been involved with the planning of Rob Brydon Songs And Stories UK Tour which set out in February 2020. Show Works provided sound hire, design and staffing for the tour in question.
‘Featuring a sensational live band, ‘SONGS AND STORIES’ tells Rob’s personal musical journey from South Wales to Hollywood and back. With a hugely entertaining and sometimes brilliantly unexpected selection of songs from Tom Jones to Tom Waits and his famed impressions of the likes of Mick Jagger, Michael Caine and Steve Coogan, Rob will regale audiences with hilarious tales from his distant and recent past.’ – robrydon.live

Songs And Stories featured a 8 piece band accompanying Rob Brydon during his show; Percussion, Bass (Upright/Electric), Guitar (Acoustic/Electric), Piano/Keyboard, Trumpet, Reeds, Cello and Violin.
The show featured a mixture of song, poetry, comedy and even some improvisation – allowing a huge pallet of sound to be designed upon.
Often in comedy, the audience reaction plays a big part of the show, where such reactions and involvement determine the outcome of jokes, songs and usually the mocking of audience members.
The saying “no two shows are the same” is often used, which is definitely true no matter what the show, however in this case – very much so!

Songs And Stories presented a new dynamic which differed from the usual theatre or live music show. The show evolved into a cross between the two with a well planned out trajectory involving (as the title mentions) songs and stories, and of course much more.
This meant the design had to cater for range of different styles of music, spoken word and underscore etc.
Unlike a theatre show where the desk might be heavily programmed to insure consistency every time, much of the hard work was performed by the operator on each night insuring each show was consistent in the quality of sound.
The desk was set out with scenes for each song, where levels would be adjusted for the instruments individually, as well as muted and unmuted if those instruments were not needed in that song. The desk still allowed for manual control of these levels for adjustment on the night however – allowing full control of the operation if needed. Rob’s microphone level was constantly adjusted throughout the show too, not being automated at all.
The desk also recalled different FX such as reverbs per song, allowing the effects placed on the instruments and vocals to adhere more suitability to the style of music in question.
However with all of this in mind, it doesn’t present much help when the song is entirely improvised, which could happen at anytime during the show, and perhaps more than once. A ‘hot key’ was placed on the desk allowing the operator to quickly jump to a base state. This was a scene on the desk with a very general mix and set of reverbs which allowed adjustment there on in to tailor to the style of improvisation. With the quick thinking of the sound operator, styles of songs could be quickly adapted too.
As with other musicals in Show Works’ repertoire such as Showstopper!, a great tip for insuring an ergonomic and flexible way of mixing in improvised situations is to have every input that needs adjusting right in front of you – ‘on the top layer’.
Often digital desks have less faders than they have inputs/channels, meaning that the desk must be programmed with different inputs on different layers.
Using our upmost favourite, the DiGiCo SD9 allowed us to have all of our ‘tools’ available to us very quickly through a use of Multis, Macros and VCAs.
Multi’s allow you to adjust the level of set of multiple channels with one fader, however at the same time, also allow you to adjust all of the levels of the individual channels within that multi at the touch of a button.
This feature on the DiGiCo SD9 worked particularly well for grouping instruments like timpanis, and multiple inputs from keyboards etc.
Macros, which are even used outside of the live event industry too can be a valuable asset to have when mixing a live show. Macros were used for Songs And Stories to automate parts of the desk including; the improvisation scene as mentioned previously, showing the FX rack for quick adjustment and switching inputs for Rob Brydon’s mic in case he had to go to a back up mic.
Lastly, VCAs, a bit like Multis, have the ability to group channels whether it is an input, group or auxiliary and place them on one fader. They don’t allow for any specific parameter adjustment other than level, however are very useful for when you want to control the level of multiple reverbs using one fader. In the case of this show, we used 1 VCA to automate the level of all of the band/drum reverbs, another to automate all of the vocal reverbs and finally another VCA to automate the overall level of the band – perfect for quick adjustments.

Another factor which influenced the design for Songs And Stories was insuring the consistency of sound throughout the tour. A number of decisions were made to accommodate this.
Microphones famed on their reputation were an obvious choice for the tour. Being out on the road, spares are hard to come by locally, so choosing durable and quality microphones meant the design could carry from venue to venue with no issues.
DPA 4099s were chosen for a number of instruments including the piano, violin, cello and double bass. 4099s are one of the most loved microphones in the industry for being so versatile in their use. 4099s come with multiple clips for many different instruments and can withstand extremely high SPL – perfect for use on stage.
Likely many DPA microphones, 4099s tend to not ‘colour’ the sound like other microphones, so you always get a accurate representation of the sound when using one. By using the DPA clips we were also able to close mic many of the instruments to the benefit of having minimum to no feedback issues in high SPL environments.
A rather new microphone to the hire stock at the time was the Heil Sound PR30. Having not previously been on the Radar, the PR30 popped up on the search for a microphone for Timpanis.
Timpanis prove very hard to mic in a live environment because of their size. It is usually preferred timpanis are mic’ed from a distance, however in a live situation this can be very ineffective due to the other multiple sound sources on stage.
After a couple of demos the PR30 was chosen for the application – being able to replicate the sound of the timpani(s) despite it’s close distance, with the cardioid nature of the microphone also helping minimise noise from other locations on stage.
Given the title of the show, Rob himself had to have a high quality and reliable wireless microphone solution. Sennheiser was chosen for the wireless side of things and directional antennas were used with the Sennheiser G3 system to maximise the signal from Rob, whilst also minimising interference from other locations.
A DPA 2028 capsule was used with the Sennheiser handheld system for maximum sound quality. Speech intelligibly was a must when considering this microphone – After all no one will get the jokes if they cant hear them! In addition, Rob’s impressions meant the microphone had to live up to a lot of different scenarios and still perform at its best. The 2028 made a beautiful choice in this category, handling many situations yet still sounding like you were standing next to Rob himself. The clarity of the 2028 allowed Rob’s vocals to sit nicely on top of the sound of the band, where you might find this is not the same story with a different brand microphone.

The production called for a top quality monitoring solution with a small footprint for which we employed the use of EM Acoustics to tackle the job. EM Acoustics have a range of speakers from tiny 4″ drivers right up to 15″ in their EMS range. The voicing of EM Acoustics speakers is extremely consistent no matter the size and type of the speaker, allowing consistent results across the whole board. This became particularly effect during Songs And Stories as a number of EM Acoustics speakers were used on stage;
4 x EMS-61 were used for the trumpet, reeds, cello & violin. With the players being so close together, a small solution was in order. The EMS-61s gave the players adequate level and clarify whilst also preserving ‘real estate’. This meant more space could be allocated on stage for instruments etc.
5 x EMS-81 were used for Rob himself as well as piano, bass & guitar. EMS-81s made a good choice in applications were they had to do a bit more work than usual (e.g the rhythm section) but at the same time also being unobtrusive to Rob and the band onstage.

The Hire
Being a UK Tour meant that the production had to cater for a varying array of stage sizes, house sizes, power supplies, acoustics – you name it!
For the 2020 leg of the tour, the decision was made to tour the full sound set up minus FOH PA, mainly because most of the houses had adequate PA already installed.

Show Works set out to provide the following for the tour;

Being a ‘one nighter’ the hire had to be quick to set up and strike. A number of decisions were made to accommodate this;

– 24U Rack: Having everything in one rack meant less time connecting sound kit together every night where you could avoid it. The 24U rack dubbed the ‘daddy rack’ housed the power distribution, stage box, amplifiers and wireless microphones.
Show Works opted for a shock-mount rack to protect the equipment from damage in transit, as well as helping the equipment breath in hot conditions.
– Looms: Very common in touring productions and theatre: Before the tour went out Show Works planned which cables should be running where on stage, and the most effective way to distribute them. Most of the band members had power ‘loomed’ in with their audio cables, as well as speakon cable to provide signal to their respective monitor speaker.
– Colour Coding: Who doesn’t love a bit of colour! Colour coding is certainly one of the most useful tools when it comes to identifying audio cables. Numbers and names are useful, but when you’re tired or you’ve had a dodgy hotel breakfast, colour is a lot simpler and quicker to recognise and get right.

The Services
Show Works managed both the hire and staffing for Rob Brydon Songs and Stories UK Tour, as well as the sound design of the production.
The tour operated as a job share with 2 operators touring the show. This allowed flexibility with staffing but also a fall back should one of them become ill. 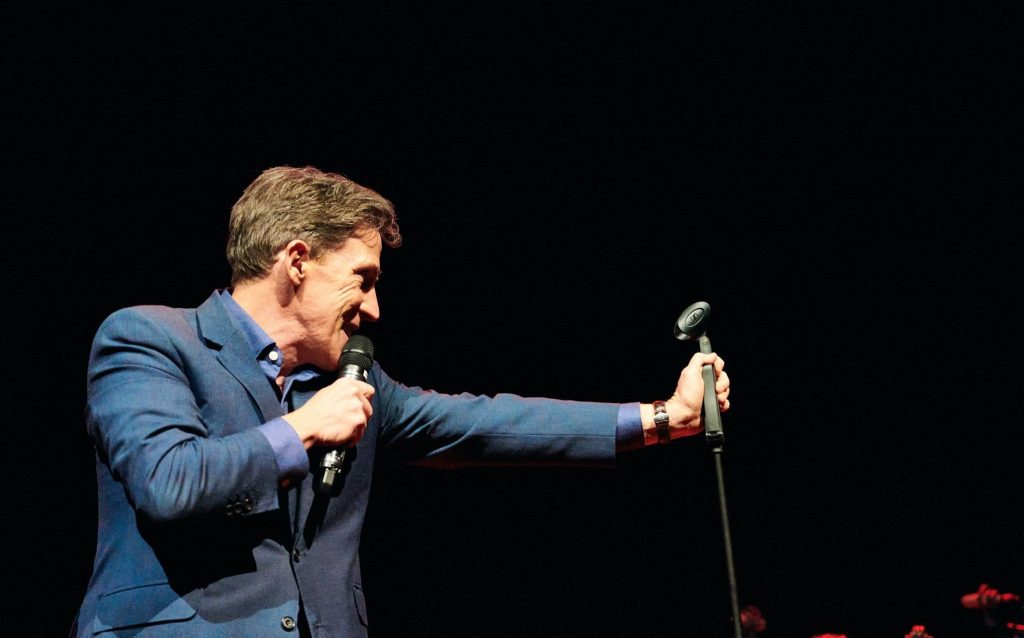 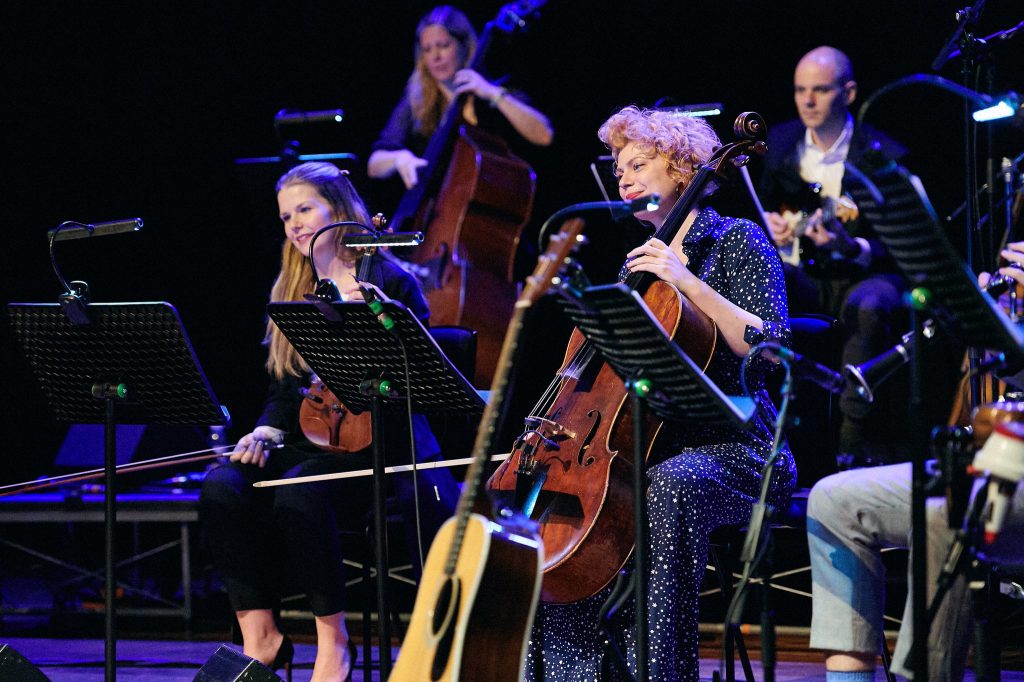